Concept vehicles of auto manufacturers increasingly exhibit car cockpits with no mechanical switches or buttons. The solid, seamless and gently curved surfaces are equipped with functions that are activated by touch. Concealed under the uniformly decorated surface are control elements that only become visible when required. The automotive interior designs convey an elegant lightness despite the highly complex underlying technology. The world's leading company in thin-film technology LEONHARD KURZ has developed an HMI (Human Machine Interface) concept panel with a forward-looking design that fully exploits the technical possibilities. This high-end plastic component was realized in collaboration with Kurz subsidiaries and partners.

Functionality concealed under a striking design

The HMI concept panel exhibits a seamless decorated surface under which diverse functions and light elements have been concealed. The panel is equipped not only with a capacitive touchscreen but also a touch panel. The central operating element of the instrument panel is a touchscreen with multi-touch function and supplementary touch buttons. The touch panel is used to control a backlighting function that is integrated into the design and produces an interplay of illuminated and non-illuminated design elements. When the illumination is deactivated, the touch controls and ambient lighting disappear, and the surface takes on an opaque and solid appearance.

A large, unusual, nature-oriented design named Fading Lines was developed especially for the concept panel. This distinctive design progresses from a continuous gradient to a high-gloss black piano surface. Besides the unusual surface design, the geometry of the component also exhibits a special characteristic. The display area of the component transitions into the operating panel in an organic curve. This accentuates the operating area, and the curved geometry acts as a tactile aid.

Decoration and sensor integration in a cost-efficient process

The detailed surface design of the instrument panel was created as a single image and incorporated by means of the IMD (In-Mold decoration) process during injection molding. The technically challenging aspect of this was the exceptionally large size of the single image, which measures nearly one meter in length. The sensor for the multi-touch panel was integrated into the rear by IML (In-Mold Labeling) during the same injection molding cycle. In addition, the instrument panel was equipped with a proximity sensor below the display that was applied by lamination. The sensor for the light-regulating touch controls was integrated by FFB (Functional Foil Bonding). The patent-pending FFB process from Kurz enables sensors to be fully mechanically and cost-efficiently integrated into plastic parts according to customer requirements.

The concept panel developed by the Kurz Group delivers, in just a few production steps, a large, curved and fully functional part. This fully decorated part features a highly durable surface that meets the commonly used specifications in the automotive industry. It is also equipped with sensors for extensive touch functionality. The concept panel demonstrates a new approach to cost-effective production while providing greater design freedom.

A technology alliance of specialist partners has enabled the development of an HMI concept panel that meets the requirements of the future. The know-how of the various industry experts was the key factor in this innovation.

Producing the complex part placed the highest technical demands on the IMD coating process, machine, mold, plus plastic material. It required all components to be precisely tailored to one another. The individual elements of the overall HMI concept were all developed within the Kurz Group, including the surface design, part design, and the backlightable IMD coating. The design of the Human Machine Interface was implemented by Kurz Digital Solutions. The sensor technology for the FFB- and IML-capable touch sensors was supplied by the Kurz subsidiary PolyIC. The process technology for FFB integration comes from the stamping machine manufacturer Baier, another member of the Kurz Group.

The part was produced on an IntElect, the latest generation fully electric injection molding machine from Sumitomo Demag. This ensured the highest level of energy efficiency and maximum precision in all process steps. The injection mold, which was tailored to the hot runner system, was produced by the mold manufacturer Siegfried Hofmann. The highly transparent thermoplastic material (Makrolon Ai) used for the component was specially developed for automotive interiors by Covestro.

Hot runner technology from HRSflow was employed for the injection molding process. The injection process can create stresses in the part that negatively impact on the appearance in the transparent area. This is a particular risk at low wall thicknesses, for example in the Kurz panel which has a part thickness of just 2.5 millimeters. The FLEXflow Evo servo driven valve gate system was therefore employed for the injection molding process. This allows gentle, low-stress injection and enables the perfect appearance of the IMD design. A further challenge arose due to the requirement for a low internal mold pressure for the concurrent back injection of the IML sensor and IMD coating. The FLEXflow Evo enabled this internal pressure to be precisely controlled.

Recognized with the Red Dot Award

The results of the close collaboration and combined know-how of the technology partners impressed the jury of the Red Dot Award, who awarded the Kurz concept panel with a Red Dot Award 2020 for good design. It received the award in the product design competition and in the automotive category. 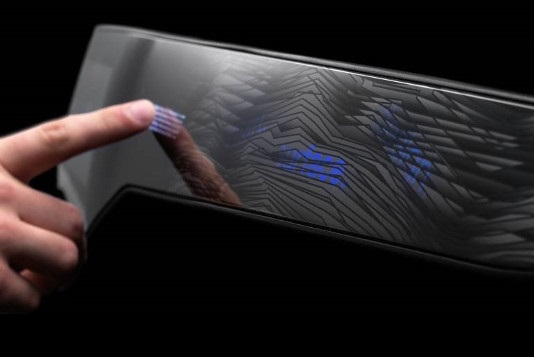 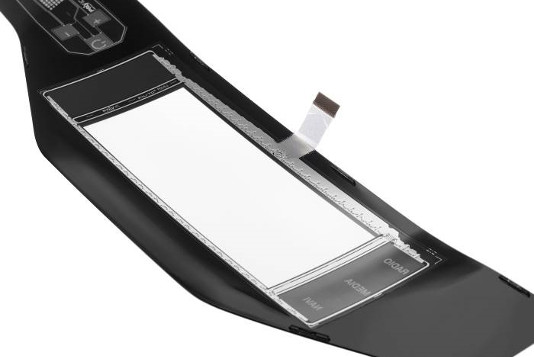 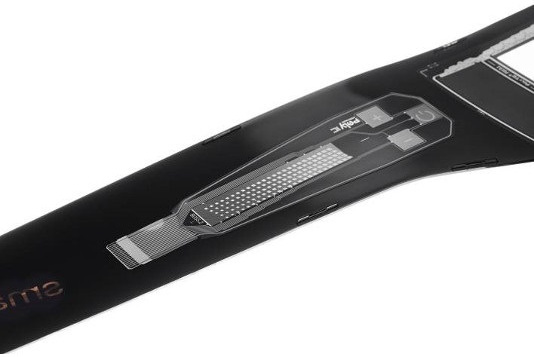 The sensor for ambient lighting control integrated by the FFB process (Photo: LEONHARD KURZ)
This website utilizes the cookies' profiling in order to guarantee a navigation as much as possible in line with your preferences. To learn more or to opt out of all or some cookies, click here